Moldova Mission exists to bring the hope of eternal life in Jesus Christ to the people of Moldova through Camp Emmanuel in partnership with the local church.

A diverse and passionate group of community leaders and professionals serve as the Moldova Board of Directors.

Phil (President) and Greg  (Executive Director) developed Moldova Mission and assembled a valuable executive board that includes a few experienced business owners, accountant, lawyer, engineer, building contractor, Moldovan-American and YMCA camp designer. Each of the Board members has served in Moldova.

Phil worked with the police department for 17 years before making the transition to m. pastor at a large church in Raleigh, NC. Phil developed great leadership skills as a supervisor on the Raleigh Police Department and in ministry as an elder at his church. He continues to lead teams all over the world and has gained a wealth of experience dealing with other governments and cultures. Phil is married to his wife of 23 years, Linda, and they have four children. 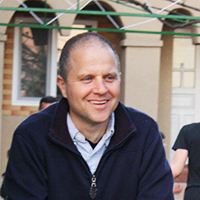 Based in London, Greg is an experienced basketball coach, motivational speaker, and organizational leader. He has been training athletes and developing leaders for over 20 years in the US, Europe and in many other nations. Currently, he is leading the growth and development of sports clubs in west London and Eastern Europe.  Greg is married to his wife of 17 years, Brittany, and they have five children.

Amanda Chambers committed her life to the Lord through a youth camp when she was a teenager in Tidewater, VA. She was the missions coordinator for her Intervarsity small group at UNC-CH. After completing a degree in English, she received her masters in library science and worked as a short termer in a Taiwanese seminary library with Overseas Missionary Fellowship. Amanda is a stay at home mother who has a heart for the people of Moldova. She and her two sons, David and Luke, have traveled on multiple mission trips to serve in Moldova. Amanda and her husband David just celebrated their 33rd anniversary.

Valeriu (Val) Dolganiuc is a Moldovan native. In 2000, Val moved to North Carolina to attend Southeastern Baptist Theological Seminary. After graduation, Val moved back to his hometown of Cahul, Moldova, where he served at Emmanuel Baptist Church. Val worked as a translator for many short-term missionaries that traveled to Moldova after the fall of the Soviet Union. In 2005, Val introduced Phil Medlin and Greg Burton to camp ministry in Moldova. Val now has residency in the United States and lives with his wife, Natalia, and their three children. He continues to travel to Moldova on short-term trips.

Matthew Faucette is an attorney in the state of North Carolina. His current practice areas include Federal and State Court Criminal Defense, Real Estate Law, Wills and Estate Law, and Civil Litigation. Matt graduated from the University of North Carolina at Chapel Hill and earned his M.B.A. and law degree from Campbell University. Matt often travels to Moldova to serve on our short-term mission trips and provides valuable legal advice for our board and project. Matt is married to Heather and they have three children.

Robert Jackson is the Vice President of American Homesmith, a building company located in Raleigh, NC. Robert has been involved in local and international ministries, helping to coordinate short-term missions, administrative functions, new construction projects and fundraising. When he is not enjoying acquiring, financing, developing or building new homes at work, he spends quality time with Robin, his wife, and his two sons.

Christopher Romeo is a Security executive in the world of hi-tech. Chris has a passion for using martial arts to reach the lost in Moldova. Chris is married to his wife of 22 years, Deb, and they have four children. Together the family serves in Moldova during the summer months, leading VBS, teen camps, and serving at Emanuel Baptist Church.

Paul Storey currently works as the Chief Financial Officer of a commercial flooring company in Raleigh, NC. He has been involved in the Moldova Mission work since its inception. He, his wife and two of his children have been to Moldova and served at the camp. He is a certified public accountant and serves on the board bringing accounting and financial experience to the project. He has grown to love the country and people of Moldova and desires for many to be impacted by the camp. Paul is married to Jeannie and they have three children.

Jule Smith is President of Fred Smith Company, delivering excellence in construction for over 80 years. He is our newest board member. Fred Julius “Jule” Smith, III grew up in Johnston County, NC. After graduating from Clayton High School, he attended Wake Forest University and earned a Bachelor of Arts in History as well as a Masters in Business Administration. He served in the United States Navy from 2004-2012 as a Supply Corp Officer, and today serves on the Board of Directors for the North Carolina Chamber, Raleigh Rescue Mission, and Saint David's School. Jule and his wife, Alisa, live in Raleigh and enjoy precious family time with their four high-energy children: Ardyn, Lila, Julius, and Gabriel.

Lewis McMillan is a division manager for a commercial flooring company in Raleigh, NC. He grew up in Raleigh and is a graduate of Wake Forest University.  During high school, college and directly after college, he worked in YMCA camping.  After years of “recruiting”, Phil finally convinced him to go to Moldova 6 or 7 years ago, and now he can’t say no!  He fell in love with Moldova, the children of Moldova and the summer camp.  Lewis and his wife, Beth, have been married 33 years and have three grown children.

Bo Roberts is a retired YMCA Camp professional who spent nine summers and then after graduating from the University of North Carolina-Chapel Hill, 34 consecutive years in resident camping. He loves his wife and three children and he loves Jesus. His work has included most aspects of camp, including hiring and supervising over 3,500 staff, and he is particularly passionate about our new camp in Moldova. Bo is an Elder at his church and taught High School Sunday School for over 25 years.

Kent Barney is the Director of Engineering Services for a large commercial building contractor in North Carolina. He has 26 years of civil engineering experience with emphasis on site planning, grading and utility design. Kent’s experience in site design and construction has been utilized in the master plan development of the camp. His entire family has been involved in the local sports camp in Moldova for five years. His two daughters have been actively involved in raising money for the Hope Houses for the last five years. Kent is married to Julie, his wife of 23 years, and they have three children.

Moldova Mission is a 501(c)(3) non-profit organization. All contributions are tax deductible.